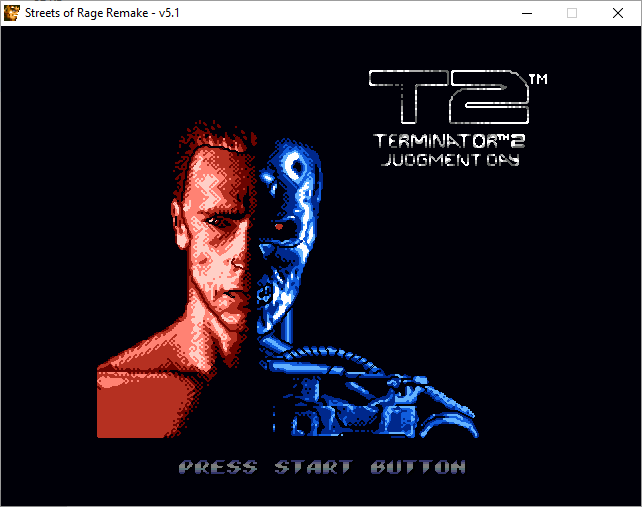 We have all heard of the great terminator - a robot executor from the future who travels through time and was once played by Arnold Schwarzenegger.
When the first parts of this saga come out, Nintendo sets out to create an electronic game dedicated to this character. The studio is doing a lot and so one of the cult games for Nintendo - Terminator 2 was created. For its time it was avant-garde in the world of games and programming. The qualities are amazing and you will even see a simulation of 3D action and interactive sets, which for those times and the capacity of Nintendo is a very good achievement.
Years later, the game had its fans, and a number of remixes were born, one of which was a remake of Terminator 2 created by Serrr for the Streets of Rage Remake virtual console.
The game has many added scenes and takes place in both single-line and multi-plane planes. Significant improvements have been added that stem from SoR decorations and fit perfectly into the Terminator story.
Here the characters are replaced by those of Streets of Rage, and the image of Adam is given additional qualities to make him a real Terminator. Of course, you will be able to choose each of the characters provided by SoR.
You will play all the missions of the game again. They have been improved, while the game's inherent complexity of the plot is preserved. The gameplay is very intriguing.
In short - with this mod you will be able to replay the history of the Terminator in a new, unique and unprecedented way.
Very high quality products and intensive gaming.
In essence, this is a free mod to the game Streets of Rage Remake 5 and you will be able to play it after a short manual installation.

Note:
This game is optimized and works great for SorR version 5.2.
If you have version 5.1 engine then just put the folder of this mod in the mods / games directory without adding data and palettes folders
Turn on the game from SorR.exe and select SOR-MAKER from the menu.
Thats all - play and fun!
Creator of this game is the French artist Serrr and SoR Remake society.