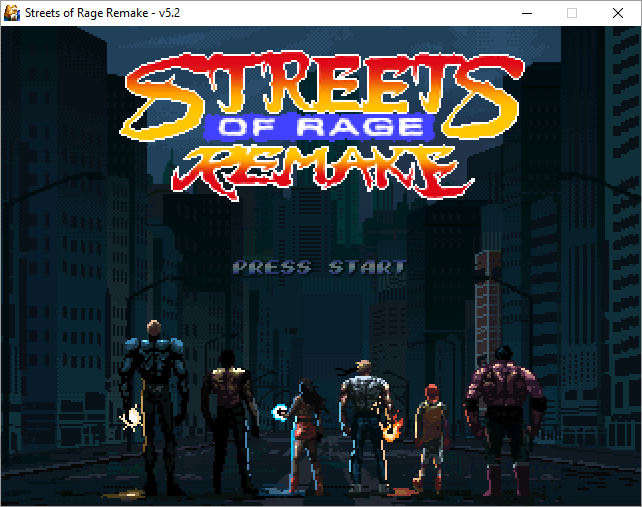 Another original version 5.2 of Streets of Rage Remake, produced by Bomber Games, is full of exceptional innovations and improvements.
Changes are everywhere. From the Blaze store to the gameplay. However, in the tradition of the creators of Bomber Games, the game has retained its authentic spirit. Fans will play with the feeling of the same original atmosphere from previous editions, but with many new additions.
On the strategic menu, you will notice, for example, that now the most expensive option is "All Char Version".
We all know that our favorite characters from the three parts of Streets of Rage and Bare Knuckle have a different look, which is typical for each department series. With this option you will be able to unlock all the different versions and play with the one you like.
You can edit the artificial intelligence of your enemies or change their names as you wish.
Additionally, in this game version, credits are collected much easier and you will get rich even in a plaing of low difficulty.
The Blaze store also has cosmetic changes. Now to the attractive look of this heroine are added a rocker leather jacket and a bow tie, reminiscent of casinos in Las Vegas.
Despite these fun nuances, however, Streets of Rage Rmake v5.2 continues to be an amazing super fight action in a beat 'em up style.
From the Blaze store you will also be able to unlock additional characters, such as Elle, Shiva, Rudra, the kangaroo Victy, as well as Mr.X himself. There is also the character of Ash, who, in addition to having an attractive vision, is also quite strong.

There are also significant differences in the main characteristics of the engine. Now Streets of RAGE Remake is widescreen.
New decors and new gadgets have been added to the gameplay.
There are a dozen new songs to serve as a background music. Graphics and artificial intelligence also differ from older versions, such as v5.1. Your enemies are fighting differently, and now the "normal" difficulty level will seem harder.
In fact, SorR5.2 is full of many interesting elements.
All mods you put in this version will also benefit from its improvements.

Creator of this game is Bomber Games and SoR Remake society.