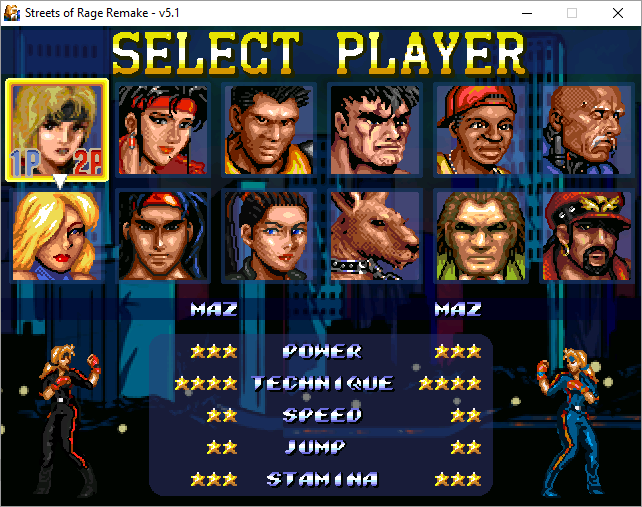 The creativity of art creators knows no bounds of their productivity. Here is another new upgrade for Streets of Rage Remake 5.1, which is also compatible with version 5.2
This is another patch that adds a new character to the Streets of Rage characters.
Maz V 4 is entirely the work of the SorR community volunteer team. Collective image on which many authors are working. This character was originally produced by Lu-Kwik for the SorR v4 console. He draws inspiration for his work from his girlfriend and thus creates the image of the same name.
The image is successful and so a whole team of developers are involved in the work, who are working to adjust this figure to the new SorR V5.1 and SorR V5.2 engines.
Zak, Puzir, Serrr, SpideyKeiiti produced a number of improvements to the model when daniel2221 joined the team. His alternative developments give impetus to programming and so the new character is ready in an extremely short time.
Bio:
As we mentioned, the inspiration for this image is a real model. You will notice that Maz's character is a living, dynamic image, and her grips and movements are full of life and energy. Although it does not have the theatricality of the other characters in the game, it is distinguished by its human and realistic architecture. For her uniform she wears a suit similar to that of Buce Lee from the Legend of the Dragon but black in color with red edging.
Technical characteristics:
The model does not have its own tree and niche. Instead, the patch replaces one of Axel's images. In this way, Maz uses his engine for its propulsion. The basic characteristics are the same, except for the special blows that strike far away. The changes caused by this patch are rather cosmetic. However, in the gameplay they look quite different. The image of Maz is characterized by fighting skills, as well as those of Axel, Shiva and even Chun-Li, which guest in the series. The combination looks quite successful and Maz performs very well in battle against stronger opponents.
In strength it is at a medium level, characterized by speed and agility. Although, there are limited opportunities for jumping, its technicality and helps to deal with the oncoming a lot enemies. 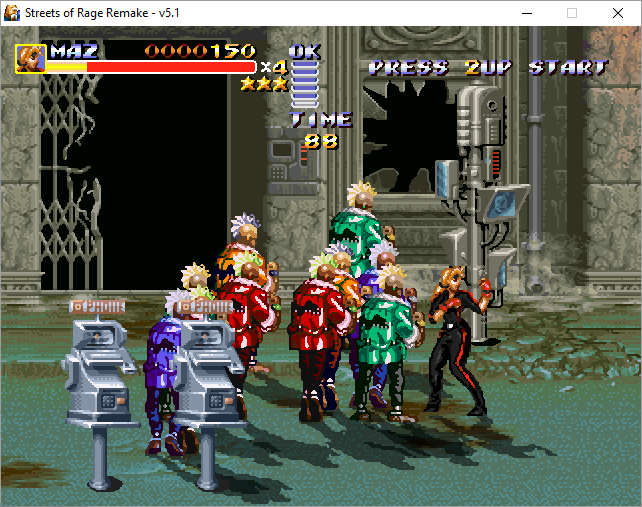 It is easy to play with the hero of Mz. Gamers will find that its universal characteristics make it a favorite fighter for every single one.
This fighter has an ergonomic fighting style, which did not break much of the provided weapons. He fights well and applies various grips, but does not do well with the attributes provided, such as logs, baseball bats or swords. Relatively slow and short strokes that do not cause much damage to the weave.

These Character patches are produced and made available for free use by the SorR community. including Zak, Puzir, Serrr, daniel2221 и SpideyKeiiti.

Instructions - how we can install the Maz's character patch?
This patch is tested and works on SorR5.1 and SorR5.2.
- Download SoR Remake v5.1-v5.2 first.

- Download and unzip - Maz's Character patch.
A folder called Maz will be displayed.

- Copy the chars and backup_chars folders from the Maz \ palettes folder and paste them into the palette folder of SorR v5.....
\ Streets of Rage Remake v5.....\ palettes
This will automatically replace and add the necessary files. of the game.

- Copy all other files without the palettes folder and paste them into the data folder of SorR5.1
\ Streets of Rage Remake V5.1 \ data

- If you no have data folder, you must Create one - in the main derectory of SorR 5...
(this means that you need to create a simple, empty new folder to rename to data)

Note!
This image will replace one of the three variants of the Axel.
How to uninstall Maz patch?
Before installing this patch.
You can copy and save the chars, bechup_chars and data folders, if you have one.
If you want to uninstall, just delete the appropriate folders and restore the old ones.
Note!
It is possible that installing Maz Patch will erase the ability of the characters to use a number of attributes from the Blaze's shop - so it is advisable to keep a backup copy of your savegame file. Once you return it, the game will use all its features again.

Note !
-If there are people among you who want to improve this image, they can always do so.
You can visit the creators' forum page via the link at the beginning of the article.
Anyone who wants to create new images or new mods or contribute to the development of the Streets of Rage Remake community can visit the forum and embark on the wonderful world of creativity. The open society gladly accepts all those who want to create their own works to travel the world.