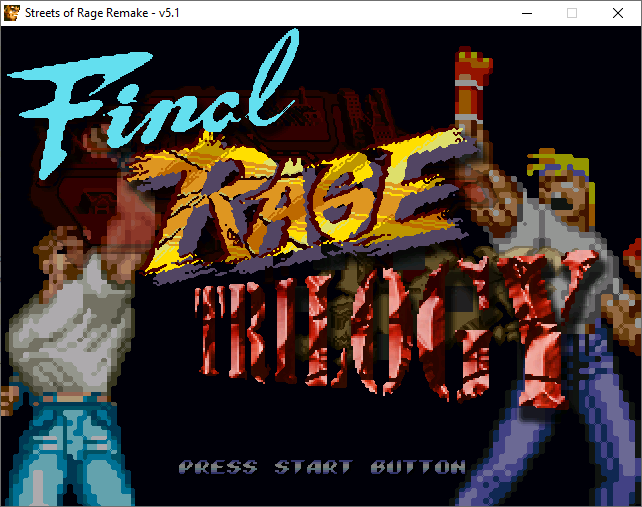 Too often, people wonder if there is a place in the universe that is just like Earth. Identical world to create their own alternative population.
Well you can think about it while playing this unique, great and interesting remake.
The two competing game stories FF and SoR are now combined into one common game to which many improvements and innovations have been added.
The atmosphere will bring back the world of Metro City and the adventures of the characters from Final Fight but with the fighters from Streets of Rage. Immersion in this atmosphere is excellent and complete.
You have an extremely long gameplay, which is divided into four separate chapters. More than six hours of intense play through dozens of alternate trails, a maze of roads, micro stages and transatlantic flights that will gradually take you to different battlefields.
Now the characters from Wood Oak City are placed in this new environment.
The synchronization between the individual elements is excellent and the band of Zan and Axel looks great against this new background.
The different stages of the game can be selected at the beginning of the game. You will be placed is a corridor with several entrances. Each of these entrances will send you on a specific mission. These are actually the well-known games from the Final Fight trilogy. Whichever path you take, it will lead you to a number of branches that can take you back to other stages of the game. To unlock the last fourth part you will have to defeat any of the previous bosses. You will return to the beginning and there you will be able to choose the fourth route that will take you to the final boss.
Final Rage Trilogy is one of the best compilations we've ever played. This applies to both SorR and beat 'em up games in general. Each of you can put together this game in your own collection - it's free.
You can also contribute to the development of these projects.
Like OpenBoR, the Streets of Rage Remake community (SorR) is an open development environment for anyone who wants and can create their own free works for fans.
Final Rage Trilogy is an example of how every brilliant talent can produce an excellent new game that will captivate thousands of fans. 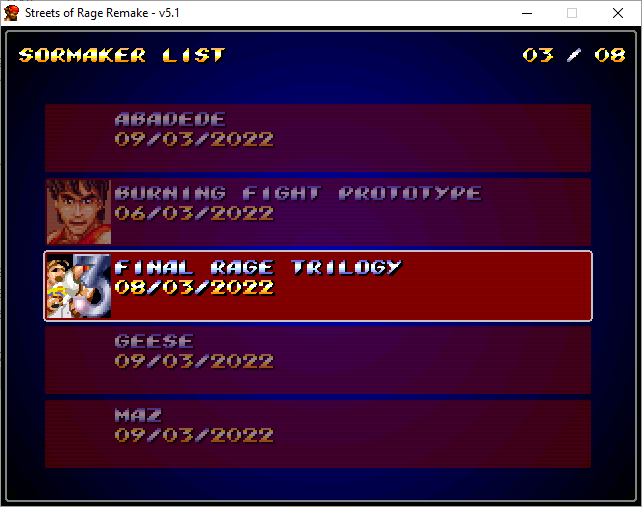 Final Rage Trilogy uses the core and engine of Streets of Rage Remake. This way, all unlocked bonuses and settings from the Blaze store will work in this game as well.
For example, the use of shooting options is very attractive - "have infinite ammo for all gun", ''keep hold of weapons between stages'' and "weapons never disapear"
So the game becomes a typical shooter similar to Metal Slughs or Alien vs Predator.
You will also be able to rely on Mr.X. If you unlock it from the main view. This character is armed with a Tommy machine gun. However, in order to use it, you will also have to use the ''Alwais Have a Full Guage'' option, which is provided in the ''cheats'' menu from Blaze's store.

The game is not really new. This is one of the mods ever created for SoRR-v5.1
This mode has been tested and operates on SoRR-v5.2.

Creator of this game is DeusX87 and SoR Remake society.