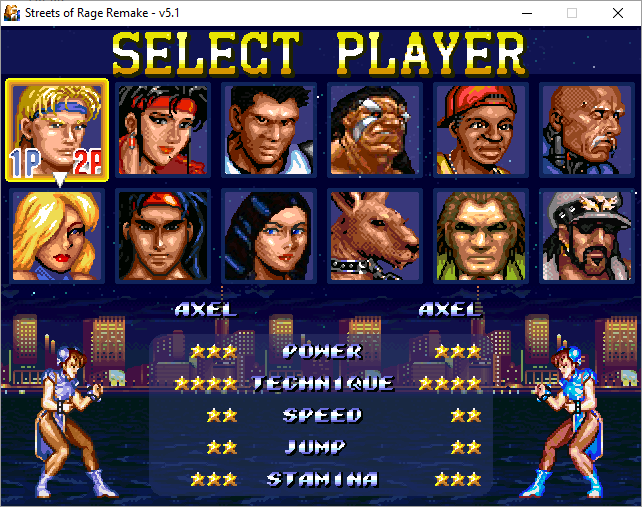 Maybe we all dream of our favorite games to be more diverse and more of our favorite characters to participate in them.
Combined games are a common phenomenon, especially among the creative communities of fans.
One such game is Streets of Rage Remake. Its open core allows a number of improvements and upgrades to be added. New mods and new characters can be added. Wonderful compilations are being created to play with interest.
- Excellent character patch. With this addition, the image of Chun-Li is added. The character is perfectly built and works perfectly. For the sfoi engine, he uses one of Axel's images, replacing it completely. Although this patch is a purely cosmetic replacement for the existing model, it should be noted that a number of features have also changed. For example, Chun-Li's special strike is much stronger than Axel's. Thus it inflicts more damage on the enemy and strikes for a longer time. But if she fails to hit the enemy, she remains vulnerable to attacks.
This model recreates a very technical fighter with an attractive fighting style that will appeal to advanced gamers.
Although the Chun-Li character's resilience is low, it is quite strong. Her main attacks easily stop Signal's cuts, a skill that other heroes lack.
Her strong punches and grips allow her to throw even fat Big Ben and Hurt over her shoulder and even Fat Big Go boss.
This fighter is also a very nimble character. She knows how to handle the provided weapons well. She uses quite skillfully provided weapons and strikes quickly when using her main attacks. However, special weapons attacks are difficult to master.
As we mentioned, this patch gives your character great strength and excellent technique, but the stamina of attacks is low.
This way the character is ideal for lower levels of difficulty or for use by more advanced players wanting to diversify their gameplay with more attractive and sophisticated figures.

- The artistic performance of this model is very good. The character of Chun-Lii is acquired from the available model for Streets Fighter 2.
The synchronization of elements is excellent and the interaction with the environment is perfect. There are almost all the special strokes that are inherent in this fighter.
-Catch the enemy and hit him without direction - in this grip the hero applies Kikouken.
-A special move from a place is performed, such as Kaku Kyaku Raku
-Special Chun-Li strike forward - Hyakuretsukyaku
-Speed attack represents - the hero accelerates and inflicts Spinning Bird Kick. If the hero has collected three stars , this shot ends with Tenkukyaku.
The attack speed and special strike are performed by a flying kick forward. However, this blow is not very strong.

These Character patches are produced and made available for free use by the SorR community. including daniel222.

Instructions - how we can install the Geese Howard's character patch?
This patch is tested and works on SorR5.1
- Download SoR Remake V5.1 first.

- Download and unzip - Chun-Li's Character patch.
A folder called Chun-Li will be displayed
- copy the contents of the Chun-Li folder and paste it into the data folder that you created.
\ Streets of Rage Remake V5.1 \ data

- If you no have data folder, you must Create one - in the main derectory of SorR 5.1.
(this means that you need to create a simple, empty new folder to rename to data)

This patch is tested and works on SorR5.1