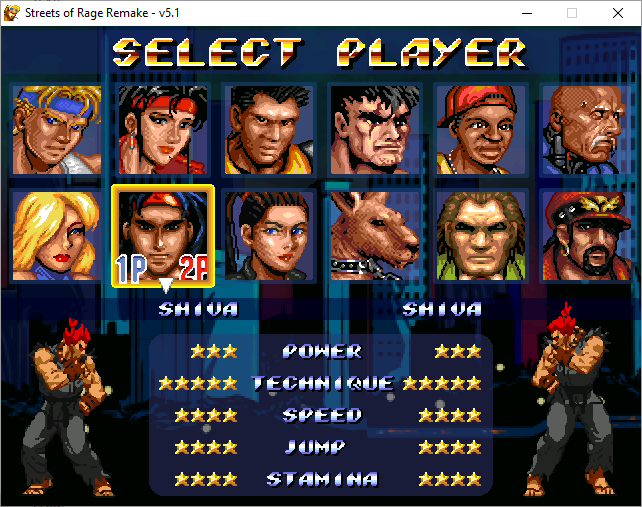 Here is a character produced by RikkaFresh, which replaces the image of Shiva by SorR5.1.
In fact, this image is not finished and there are many details that need to be smoothed out. For example, many of the features are actually Vegeta from Dragon Ball. When you use weapons, you will be a Vegeta. However, all the other features of this character are excellent.

Akuma - the "supreme lord of the fist" also known as Gouki, performs very well in the world of Streets of Rage Remake. All the basic techniques and characteristics that are a trademark of Akuma are present.
Gohadoken - this powerful striking halo of pure energy eliminates all enemies in range, inflicting defeat above average. The issue is extremely long and it strikes far and wide. Gohadoken is part of Akuma's special hit when he hits frontally. If the special blow is static, then his aura strikes everyone in this perimeter without projecting forward.

Shoryuken - this is a hit that is added to the special combined attacks that the characters from Streets of Rage Remake have.
With each upload of experience that you will be able to follow from the star indicator, this grip changes, becoming more powerful.
Your special combined attack for this hero begins as a short Shoryuken. With one star the grip gains more power, and with two stars it represents Gohadoken + Shoryuken. At three stars, the grip is again Gohadoken + Shoryuken, but it is now a far more powerful and intense move, which inflicts a long series of powerful and short blows on the opponent and ends with his knockout.
Although very attractive, this grip remains Akuma vulnerable to counter-attacks. This is also a particularly impractical ploy against characters like Abadede. In general, this strong karate hero gives way and encounters difficulties in a match against Abadede.
Fighting style.
In Streets of Rage Remake, Gouki is true to his Shotokan karate style. Although it replaces Shiva's character, his technical characteristics are very different. A short series of short blows, inflicting heavy damage on enemies. Also, this character hits much slower than Shiva.

If no data folder in your main SorR directory, you must create one.


Note!
This patch is designed for engine version SorR5.1 and will not work on any other version.
Thats all - play from the char of Shiva - fun!

Creator of this patch is RikkaFresh and SoR Remake society.

This patch is provided in the community library for free use, which means that if you wish you can get involved in enriching the character of Akuma, and its and its integration in the world of SorR!