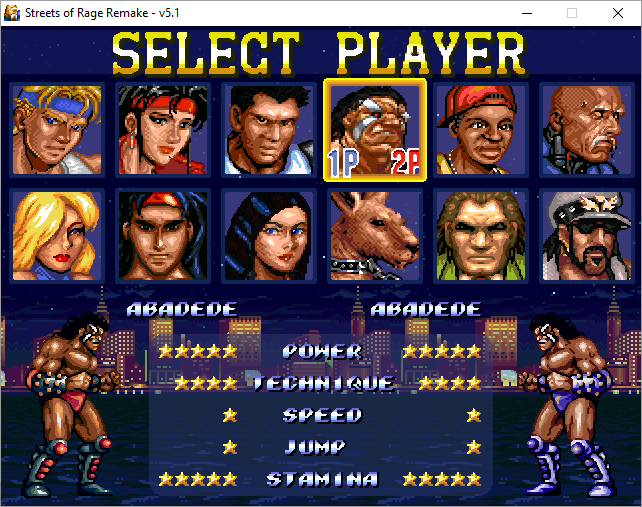 Perhaps the most extravagant and bizarre character from the Streets of Rage is Abadede. Powerful, huge, super capable. He doesn't look like a human or a mutant - he is just a huge mass of steel muscle. This character can crush the robots of Mr X with his bare hands and also wants to throw his opponents high in the air.
Abadede is awesome!
This is one of the bosses of Mr.X's union, who appears in a number of games in the SoR series. In Streets of Rage Remake, however, he is one of the main figures and appears in all episodes of this series.
Although he pretends to be a terrible superhero, his unbridled power wins fans among the audience and gamers.
The Streets of Rage Remake community creates a free patch that adds it to the rest of the characters, replacing Max's character.
This manual update adds to Abadede as the main selectable character you can use to play.
At its core, this patch replaces Max's skin, but also adds significant changes to the specifications.
Although the main engine is that of Max, the new character of Abadede is much stronger, accelerates powerfully and although it is very slow, his blows are lightning fast.
Abadede makes good use of the weapons provided to him, but his main strength, and advantage, is in his special strikes. They are so powerful that they easily destroy a bunch of opponents with one blow. Well such powerful strikes make him easily vulnerable to counter-attacks. For example, Bourbon is a very difficult opponent for the  hulking Abadede. His fast gait, long strikes and ability to block the enemy's attacks make him a real laborious ordeal.

Several pallets are included in the series of improvements. These are a series of decorations that make the character more attractive and can be adjusted according to the wishes of the players. Additional features, such as the Geuge maximum, can only be used in mania mode.
The Abadede character patch is designed for the SorR 5.1 engine. It replaces and adds a number of elements to the main directory of Streets of Rage Remake, which means it works with all mods powered by this version of the game.

These Character patches are produced and made available for free use by the SorR community. including daniel222.

Instructions - how we can install the Abadede character patch?
This patch is tested and works on SorR5.1
- Download SoR Remake V5.1 first.

- Download and unzip - Abadede's Character patch.
A folder called Abadede will be displayed.

- Copy the chars and backup_chars folders from the Abadede\ palettes folder and paste them into the palette folder of SorR 5.1
\ Streets of Rage Remake 5.1 \ palettes
This will automatically replace and add the necessary files. of the game.

- Copy all other files without the palettes folder and paste them into the data folder of SorR5.1
\ Streets of Rage Remake V5.1 \ data

- If you no have data folder, you must Create one - in the main derectory of SorR 5.1.
(this means that you need to create a simple, empty new folder to rename to data)

Note!
Because Max's character will be completely replaced, you will not be able to use this hero. Therefore, it is recommended that you pre-copy and save the chars and backup_chars folders, as well as the data folder if you have one, before installing the new character. If you want to restore the old look of the game, just delete the new ones and return the previous ones.

This patch is tested and works on SorR5.1
Note ! - if there are people among you who want to adapt this image for version 5.2, they can always do it.
You can visit the forum page of the creators through the link at the beginning of the article.