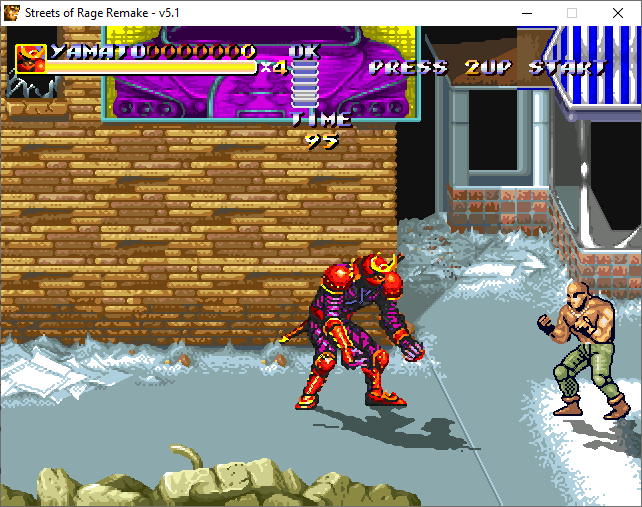 Let me introduce you to a retro game that came out in the distant 2013. Although one of the first games for the SorR console, it has its qualities. In fact, if you want to replay the story of "Captain Commando" in a new way, you can upload the console to your computer and load this mod.
The additional update from 2018 adds some additional features to this interesting game. Enemy stamina has been reduced, although the number of bosses has doubled. Enemy units are also available, which have extremely low endurance. They are literally eliminated with a single blow.
Another important feature of this mod is that Cm_Blast uses the original sets from the game of Capcom - Captain Commando. This way you will go along the original routes and battlefields. All this, but in a new way. Streets of Rage bazookas are very effective in this new environment. Their explosives easily overthrow enemies by splitting them in two. Powerful explosions fill the screen. The game is actually quite difficult and long. But if you use the bonuses from the Blaze store, it will be significantly reduced. This is because rifles and bazookas are very effective here. If you turn on the "infinity ammo" option, this will give you a big advantage. If you include the "keep hold of weapons between stages" option, your advantage will be huge. However, there are some speed drains and stages that are still difficult to overcome. For example, stage 5 with riding bikes is difficult to overcome. Even if you knock down the motorcyclist, the motorbike starts moving towards you and explodes. In addition, you also race to them at high speed.
The game will appeal to many, especially those who are fans of Captain Commando.
Like all SorR mods, this one is available for free download via the provided links.
License - Play for Free.

- Copy ''Captain Commando'' folder and paste it into the ''games'' directory of SorR.
path:
SorR\MOD\ GAMES

-  Copy the content of ''Paletas Captain Commando'' and paste it into  the enemies folder of SorR
path:
SorR\ palettes \ enemies

Creator of this mod is Cm_Blast and SoR Remake society.