SoR - At The Movies (Director's Cut) 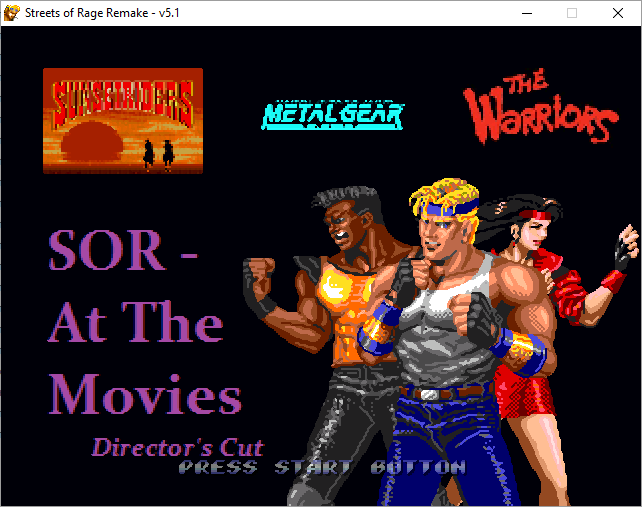 The mod for Streets of Rage Remake 5, At The Movies (Director's Cut) is another fantastic proposal from the SoRR community.
The author's approach is amazing and it exceeds the limits of diversity and imagination. Benny26 sends our hero beyond the sets. Hardened in battles on the roads of Wood Oak City, they will now embark on adventures in other series. Their supreme fighting skills will make them indispensable characters.
The game is long. Almost two hours of active gameplay. Stories are practically separate new games that you will have to go through. You will be able to play ''Sunset Riders'', ''Metal Gear Solid'' and ''the Warriors''. The author's special selection of compiled games, where you will be able to pass the tests of ''Golden Ax'', ''Double Dragon'', ''Mortal Kombat 1'' and ''Fatal Fury''. In addition, the game offers a final stage where our characters return to the whirlwind of adventures of Wood Oak City.
Mr.X is outraged by this new acquisition for the city. The big movie studio is threatening to take away all his bosses, and the better conditions will turn them into highly paid actors.

For its basis and engine, the author of SoR The Movies (Director's Cut) Benny26, uses the core of Streets of Rage Remake, adding the scenery from the respective games that participate in the story. You will be able to immerse yourself in the amazing world of cinema by following your favorite character. You have to pay attention that the new games do not follow the traditional arithmetic of Streets of Rage and so you can find yourself in countless traps and precipices. The stage of James Bond, for example, is especially difficult to climb the railings you have to cross. You will not be able to climb directly and you will have to bounce to the side and try to move your character in the air so that he lands on the railing. This is done by jumping and the up button.
Under the games applied in this mode, there are many more surprises and bonus levels. A completely new and original broadcast of this game, which will bring a fresh note to the classic action game called Streets of Rage.

note!
It is recommended that you back up your original palettes folder before replacing it with the new mod. To restore the default SorRV5 settings just restore the original folder and remove and remove the new one folder.

Creator of this game is Benny26 and SoR Remake society.

The director's cut  is a unique, great new gaming experience beyond the sets. To the fans of Streets of Rage Remake.