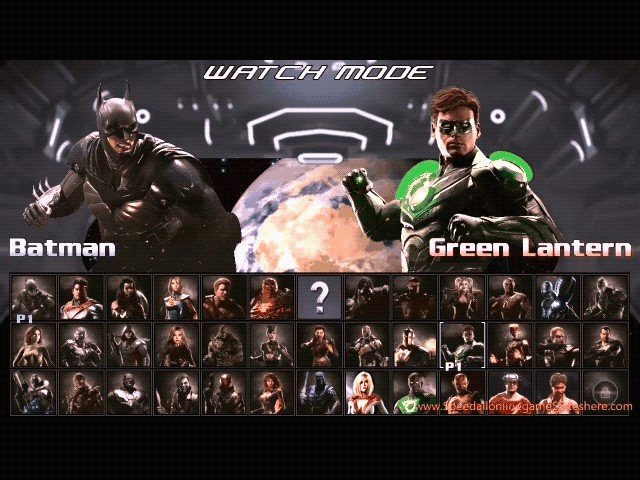 A great game from the mugen society.
The menu is excellent. Inspirational animation in the first frame. The soundtrack takes you forward into the depths of the universe.
Injustice 2 presents you a compilation compiled by the superheroes of our world. Unceasing martials in a tense plot. Sub-Zero and Batman will join forces and engage in battles on the countless battlefields of the universe.
Atrocitos - this powerful lord will try to stop them. Its power is huge and even for green lanterns it is difficult to compare with it.
A total of 37 of the strongest heroes in the universe will join forces in this epic clash. Each of them has its own hidden powers that help it overpower the enemy. Power, strength, agility, cunning, speed, cold lord or fierce flame, high technology or the sweeping power of nature.
The game has its qualities.
Although the layout is very good, the characters use 2D style. The figures are huge and fill the screen. However, this does not interfere with the good gameplay - on the contrary, it makes the battles extremely intense. A large set of special moves contribute to the spectacular nature of the duels.
The joker is especially attractive. His eccentric image looks great against the backdrop of such fantastic images as Superman or Gorilla Grod.
They are all selected to represent the best and most original of these stellar creations. Many of the characters have been neglected by the artists so far. In Injustice 2 Mugen they are brought together and will push the new limits of their power.

Like all other mugen games, Injustice 2 uses the standard management console.
From the "options" menu you will be able to configure your controllers, the difficulty of the game, the speed of action, the pace of battles, as well as the resilience of your life. You can increase your endurance by up to 300%.
The game starts with built-in settings, and you can use the "W" and "S" keys to move the cursor to the desired menu, and the "J" key to turn on the option.
When you load the "option" menu with the "F1" key you will be able to set the controllers of your choice.
This game was created by : abnerrse4 & friends and M.U.G.E.N. Society