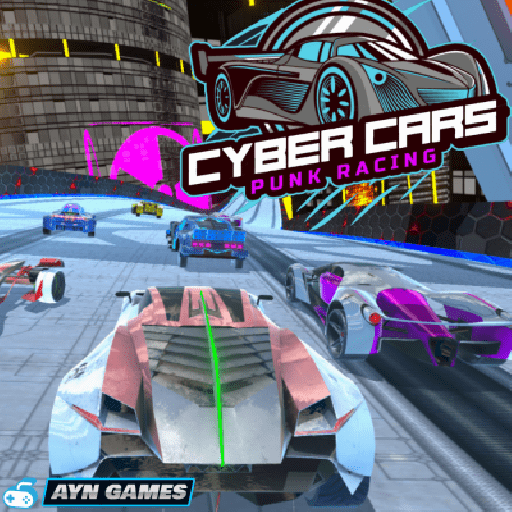 Cyber Cars Punk Racing is a car racing game that will top the charts in each genre where it is presented, as well as the ranking for a complete game box.
Excellent animation and an interesting futuristic world.
The creators have provided a large number of futuristic cars to choose from. Powerful updates to improve the qualities of your car, as well as many amazing skins.
The game also supports multiplayer.
Several game modes that include:
-Career, where you can compete in Racing mode against other cars. This is a classic car race, a game where you will compete for first place in the standings.
-Fly Parqour is an amazing adventure in virtual nature, where you will be in the air for a long time after each new bounce. The Cyber Cars Punk Racing cars are aero-dynamic and you can steer them in flight. After a strong acceleration on the track, you will have to float in the air until the next section of it. The flight ends with a precise landing on the axis of movement.
- Against Time - a classic type of race where you will test your ability to drive at maximum speed. you have to overcome the race track in the shortest possible time.
- Stunt - Looks like the Against Time track, but it's much more exciting. This race track is heavily twisted and the stunts are the edge of the possible. Very steep turns, drills, jumps and overflights between parts of the road.
- Check Point is an interesting tactical game with a car. High between the tallest skyscrapers is a ramp of welded, one after another containers.
This is a long track with sharp turns, descents, obstacles, hammers, and other all sorts of interests and facilities.

Other main mods of the game are:
-Free Driving - where during free driving you will be able to go around the neon city and pilot through its virtuoso routes. Another price find there are the diamonds you can collect along the way.
- Hot Chase, where you will have to last the longest without being crushed.
- Battle Arena - this is one of the most spectacular tracks in the game, where you will have to damage the enemy's cars with a ram until they explode. The game is played to the last survivor.
In general, Cyber Cars Punk Racing is an amazing and great game that you can play online from your browser.
This game reaches you thanks to gamemonetize.com