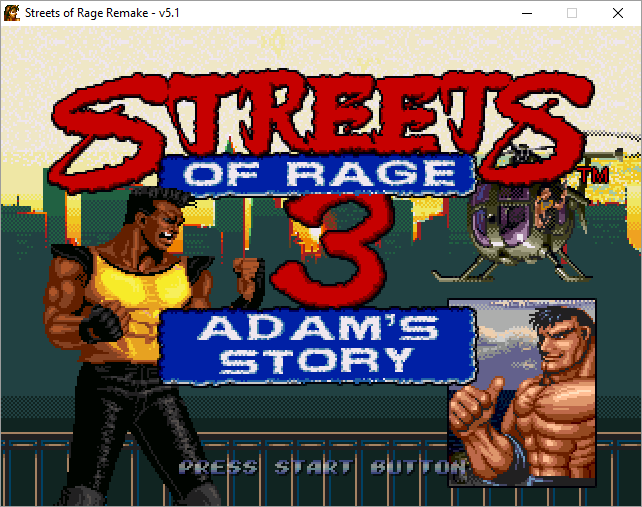 Oh! the mod of ''Adam's story is one of the best games produced for the core of Streets of Rage Remake 5.
The qualities are great - many alternative routes that will make you replay the game again and again. Dynamic and interesting gameplay. The characters are the same but the story is different.
This is an alternate storyline where another Boss is busy taking control of the city. He has infiltrated high levels of government and aims to eliminate all his opponents. The so-called Lima group aims to take over Wood Oak City. Sheff Oro - Don of the Lima family aims to eliminate both the Zan and Axel gang and the defeat of Mr.X.
That's why he split the band, giving Adam and Max Thunder new tasks and at the same time discrediting Blaze Fielding, Axel Stone and Dr. Gilbert Zan.

We all know the character of Adam Hunter. Hardheaded and serious nature. He masters and applies a powerful and effective fighting style that resembles kickboxing with very clean movements. His manliness nature leads him rapidly forward, making his way with brute force and excellent fighting technique. Adam Hunter does not avoid any necessary battles. Thus, our hero manages to defeat the organization of Chief Oro.

For its technical workmanship, the game Adam's story relies on the engine of Streets of Rage Remake. Completely new sets and new tactical elements have been added to the arrangement. New premises, railings, stairs, corridors, ramps, hidden paths, alternative roads, new buildings and new laboratories. All this, together with the new game story, creates for you a new adventure and a new atmosphere for you to play.

Although in the plot of "the Adam's story", the main characters are the heroes Adam Hunter and Max Thunder, you will still be able to play with each of the other characters. But to immerse yourself in the authentic atmosphere of this amazing additional story, we recommend that you use the main characters and these are Max and Adam.

Creator of this game is  SoR Remake society.

Adam's Story follows the adventures in Wood Oak City through the eyes of Max Thunder and Adam Hunter, as the main characters.